Like any self respecting San Francisco artist, if I’m up at 6am on Sunday morning, I probably never went to bed.  So climbing up the hill at Alamo Square, with 15 pounds of carpet in my arms, just past dawn on Sunday May 20th was a shock to my system.  My friend Russell and I suffered through the 5am alarm to secure a costume and a place in the “Salmon Spawn” of the 101st Annual Bay to Breakers Race.  We gear up and huddle as our Salmon guide gives us the basics; go slow, stick together, we stop for music, and, um, do what the police say.  Our guide also encourages us to participate in other events they create during the year--some of which are so cool, she can’t even tell us about them. 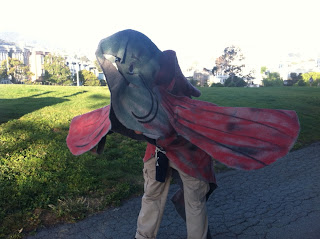 On one side we have the Painted Ladies (or the Full House house, for the folks back home) and on the other side, we have Hayes st., where the race comes through.  12 to 15 of us in our Salmon getups, but this year the street is completely fenced off.  Will the police, security, and the city allow the Salmon to Spawn?  A slight kerfuffle passes through the Salmon leadership, and our plan is determined.  After “the serious runners” pass by, we’ll make a break for it.  “You always beg forgiveness, instead of permission,” or so says the man in a 6ft fish costume.

I’ve never been to Bay to Breakers before, but I know the basics.  A beloved local tradition, famous for costumed runners, naked people, and drunk idiots.  Introduced as the Cross City Race in 1912 to lift the spirits of the city after the 1906 earthquake and fire, it became Bay to Breakers in 1965, and the world’s largest footrace in 1986.  Take a blender--throw in one part marathon, 2 parts halloween party, and a mid 90’s rave.  Mix it up, pour it out, sprinkle a street festival on top, and you have Bay to Breakers.  Get this: women were not officially allowed to enter until 1971.

In recent years the City has attempted to “clean up” Bay to Breakers, due to complaints from residents, and issues with sponsors.  Floats and alcohol have been banned.  This basically leaves running--and Bay to Breakers hasn’t been about running for a long time.

“Salmon is the only way to do Bay to Breakers” according Russell--and boy was he right.  The Salmon enter at the halfway point, and make their way against the crowd.  The first look down Hayes st. is exhilarating.  50,000 people clamber up the hill as we march down single file with our arms out, high fiving all the way.  Soon I am chanting along with the veteran Salmon “Spawn, Spawn!”
“You’re going the wrong way, you’re going the wrong way” people shout as we pass.  “Go Salmon!  We love you!”

People go out of their way to high five the Salmon, some too exuberantly.  Within five minutes my palms are hurting.  One guy cocks his arm back and sends the fastest, most malicious high five he can muster onto my hand.  I see it coming and then--ouch!  Other times I get my fingers bent back by oblivious drunks.

The high fives come attached to a blur of costumes--fairy wings adorn buttshorts and bikini tops.  Their owners wear blue, green, and yellow wigs like a technicolor army.  I see a troupe of Elvises, several Waldos, and lots of Vikings.  We pass a Bear, and the Salmon scatter to avoid being eaten.  We run in different directions and scream until the threat passes.  Men dressed as Fisherman throw their line into the group, occasionally snagging a Salmon.  I don’t look back when they are reeled away.  I notice the occasional naked person--almost always middle aged, beer gutted, white men.  I try not to, but the image dangles in my mind for several blocks.  Why are the people who want to be naked in public always the ones you don’t want to see?

The weather is only nice in San Francisco when people come to visit, and today, they brought the goods.  It’s 70 degrees by 7:30 and I’m a little sweaty under my fish costume.  We roll up on a band at Civic Center playing Fight for Your Right to Party.  Given the recent death of MCA, and the city’s attempts to tame Bay to Breakers--nothing could be more appropriate.  The Salmon stop to dance and I thrash around like a teenager who snuck out for the night.  Everyone sings along to the chorus, but I’m swimming upstream, so I do the verses:
“Your pops caught ya smokin’ and he say’s NO WAY,
That hypocrite smokes 2 packs a day,
MAN, livin’ at home is such a drag,
Now your Mom threw away your best porno mag” 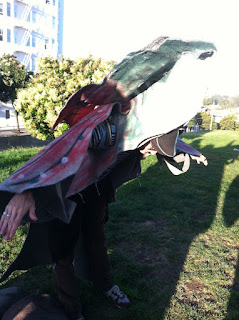 After the song we move into downtown.  The crowd thins and thickens--all pretense of running has been abandoned--it’s just a walking costume party.  The malicious high fives become more common, some people run towards me so fast I flinch.  Our group passes techno djs, and hip hop but our next stop doesn’t come until we glide up to a DJ playing reggae.  The slow rhythms are well suited for dancing in a heavy Salmon costume.  We bob up and down like stoned fish taking their time around the tank.  It’s fun but I can feel my energy draining...

...Soon enough, it’s time to spawn.  We scatter around and yell “Spawn!  Spawn!”  We zig and zag, before collapsing in the street  at 8th and Folsom.  We roll around on the pavement and kick our legs up in the air.  A crowd forms to cheer us on. Some people just look confused, they  stumble and smirk as the drink drips out of their red plastic cups.  When it’s over we mill around and pose for photos in our costumes.  The Salmon guides lead us into the Cheiftain, and the drinking begins.  Heavy drinking is always my cue to bounce, so Russell and I hand in our costumes, say our goodbyes, and walk outside.

Back in the streets at 9am, we are amidst the dregs.  People collapse on the sidewalk, pee in the alleys, and scream at each other.  There are people with registration numbers--who paid for the race--but only made it 4 blocks before falling in a drunken stupor.  Some dude who looks about 19 with black hair and baggy jeans hunches over a sewage drain.  Bright orange liquid comes shooting out of his mouth--for a second, I think he has a hose in his stomach.  Random people count along to the action.
“One!”
“Two!”
“Three” and by the fourth I lose interest.  We are wandering through the downside of a cultural event.  This is when the fights break out, when the ambulance comes, and when Tammy realizes she lost her keys.

The leftovers are why the City wants to tame Bay to Breakers, why people complain and sponsors step out.  But still, hearing Russell talk of the fisherman floats, or the homeowners on their roof with buckets of water, waiting to dowse the “I think I’ll just pee here” crowd, I feel like I’ve missed something.  Like I found a great San Francisco tradition too late.  Or I finally made it to Mardi Gras, but they banned the beads.  Of course, that’s easy for me to say--I don’t have to clean up.

The rest of the day is predictable: Muni is crowded, drunk people are everywhere--we wander around and critique costumes.  Hmm, lumberjacks are popular this year.
Russell lives right by the biggest block party so we catch a nap.  His neighbors drop several beer bottles and their brand new laptop off the 3rd floor.  I learn a new word: Schadenfreude.
Posted by -JDH at 4:33 PM

New comments are not allowed.