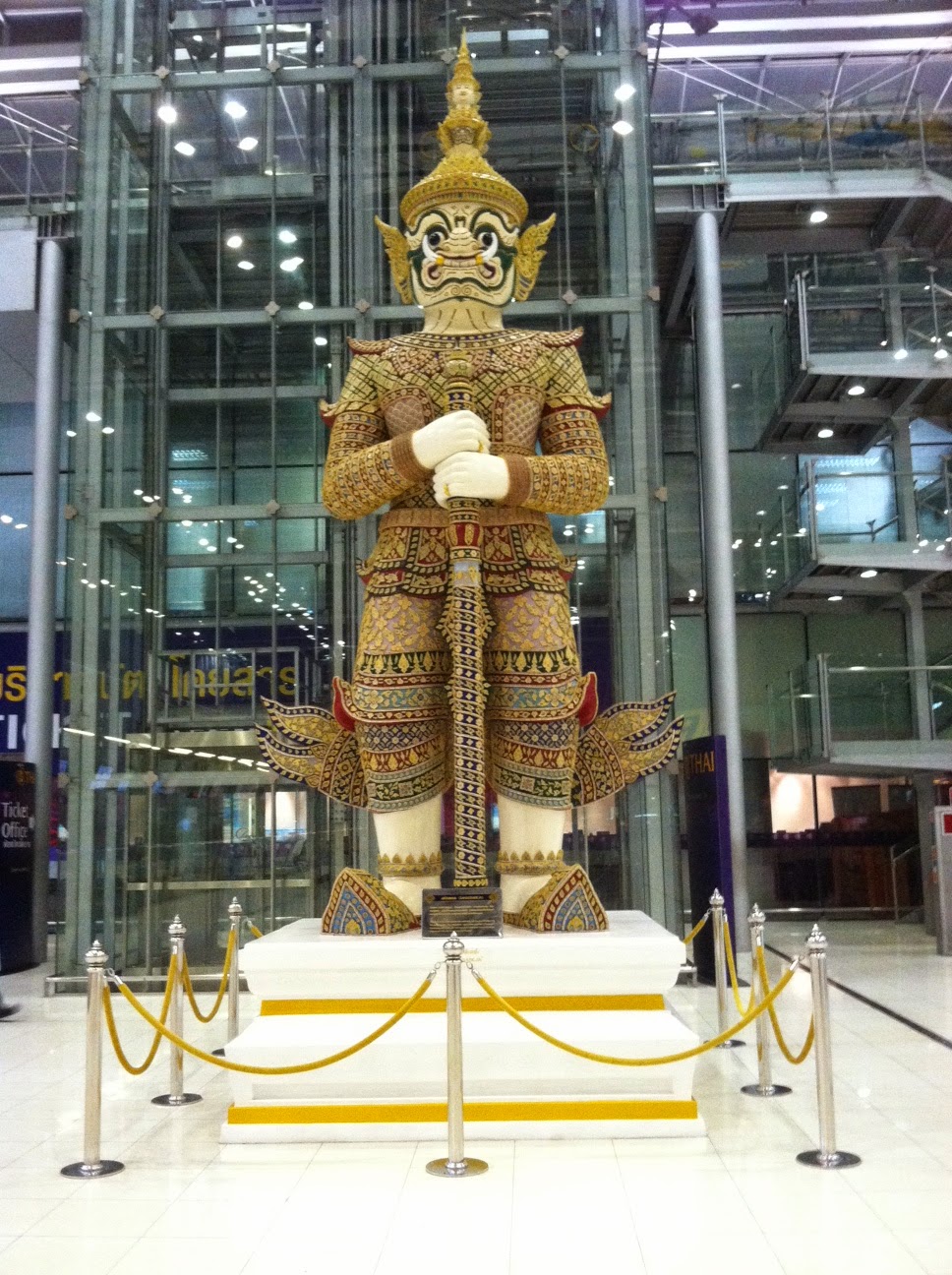 Every time I poop I pray it goes down the tubes. Few things are more embarrassing than clogging the toilet at your girlfriend’s parents’ house. The plumbing in this part of Thailand isn’t too bad, but it isn’t great either. I have a close call around day seven.

Dian’s parents own two properties in Bueng Kan, which is at the very northernmost tip of Thailand. One of them is in town, and the other is down a twisting dirt road surrounded by rubber and banana trees. The area, at least according to Lonely Planet, is a mishmash of Thai, Isan, and Lao culture. The trappings of South East Asia are apparent everywhere. New cars sit in driveways next to old, crumbling buildings. Rickshaw motorcycles, regular motorcycles, stray dogs, slow pedestrians, road side food stands and an abundance of buddhist temples painted in brilliant reds, golds, and greens clog the landscape. Cars drive on the left. Most signs are written in Thai. Very few people speak English.

The nearest airport is in Udon Thani. It’s a two and a half hour drive. We stop at the Thai version of Home Depot along the way. There is a small restaurant that serves an excellent spicy ground pork attached. Their coffee comes with a side of tea. Our bellies and the truck are full as we climb back in, with a heavy row of bathroom tiles in between us. When we reach “the jungle house,” those tiles jab us in the ribs as they bounce up and down on the road. We hold the ceiling handles and the tiles as tight as we can, passing wooden shacks decorated with hammocks, chairs, and tarps, and a clear view of the Mekong River. Directly across the river is Laos.

There aren’t a whole lot of what you would call “attractions” in Bueng Kan. On Friday we visit the Thai/Lao market. Vendors set up stands and blankets on either side of a black, paved road for about half a mile. Pedestrians and motorcycles amble through, bumping each other casually. Scooters and motorcycles are treated more like an extension of self than a tool. I see one scooter that has two girls on it; one of them is staring at her phone and driving with her other hand. The other sits crosslegged on the back eating noodles.

The smell of fish, dust, and gas all mix together into one, pungent aroma. The stalls sell T-shirts, CDs, DVDs, kitchenware, souvenirs, and a wide variety of food products: vegetables and corn, both fresh and cooked, fried insects, hot noodles, cold noodles, pork, including pigs hacked up and hauled to the market in a bucket, blood dripping out from the base of their necks and hooves, and rats, some cooked on the end of a stick and others sliced open and spread out, like a frog dissected for biology class.

The most interesting find is the tubs of baby chickens. One man has a stall with two bins full of brightly-colored chicks, with pink, green, red, and yellow hair that would look at home on a punk rocker. He scowls and crosses his arms when I take the photos, but the image is too curious to resist. Later we are told this is some kind of labeling system. 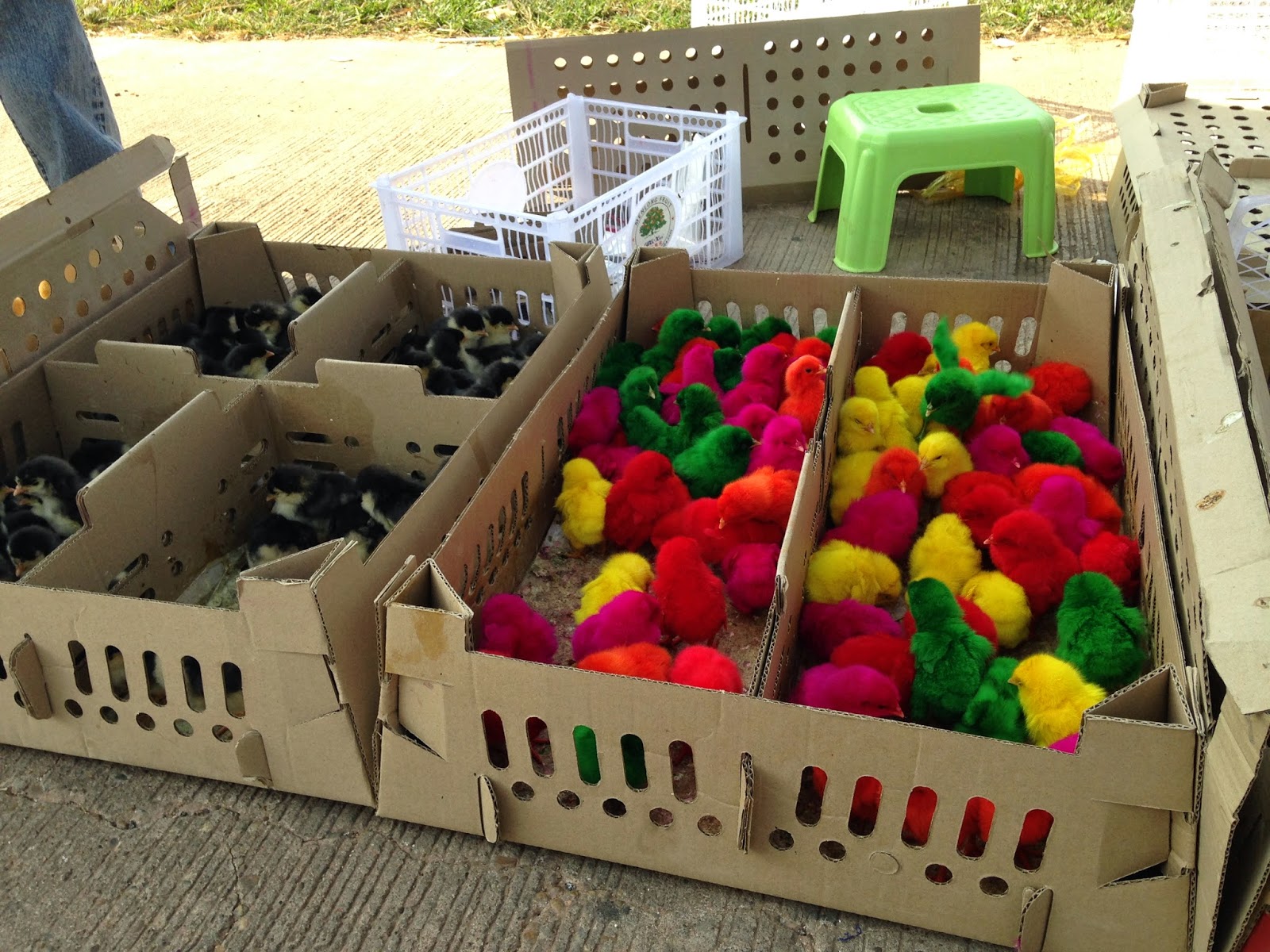 Dian and I buy nothing at the market. We follow her parent’s example and stick to “clean” vegetables from places like Tesco.

The other local place of interest is called Wat Phu Tok. It’s a network of rickety, wooden staircases that circle around a mountain. Some people call it the “Stairway to Heaven.” It was, the story goes, built by a monk named Ajan Juan, and the seven levels of stairways represent the seven stages on the road to enlightenment. Walking up the steep steps to level five is a good leg workout, and rewarded with a break at a buddhist prayer space. The custom is to stop, remove your shoes, and enter the alcove to bow and pray to the golden buddha statues. If a monk passes you on the mountain, you’re expected to bow briefly. The monks wear bright, orange suits that wrap around their body and expose the shoulder. They shave their heads and wear sandals for shoes.

Level six is terrifying. The staircases give way to a small, wooden deck with a tiny handrail that hugs the side of the mountain. The boards creek under your feet. Sometimes they bend down as your weight shifts on them, tempting a view at the thousands of open feet beneath you. We instinctively lean towards the wall of rock, gripping it with our hands as we go around. The view is incredible though. It’s exhilarating, beautiful, and frightening all at once. The pictures don’t do it justice.

Level seven turns out to be a disappointment of shrubs crowded over unmarked paths.


Other than that, our time passes more or less peacefully, with lots of errand running and occasional family drama. We sip blended coffee drinks in sidewalk stands and eat fish, cooked whole with the skin peeled back, under tarps on the bank of the Mekong. We head to Udon Thani for some official business and eat at a place that offers “rice with spit in sauce” and sells a hideously-sweet “San Francisco Ice Cream.” Then we go to see the famous “dancing orchid.” It doesn’t dance. In the afternoon we stop by a place that gives excellent boat tours in the morning. We get out of the truck and gaze out at the water under the hot, midday sun.

“Yep,” I say. “They probably give some nice boat tours.” 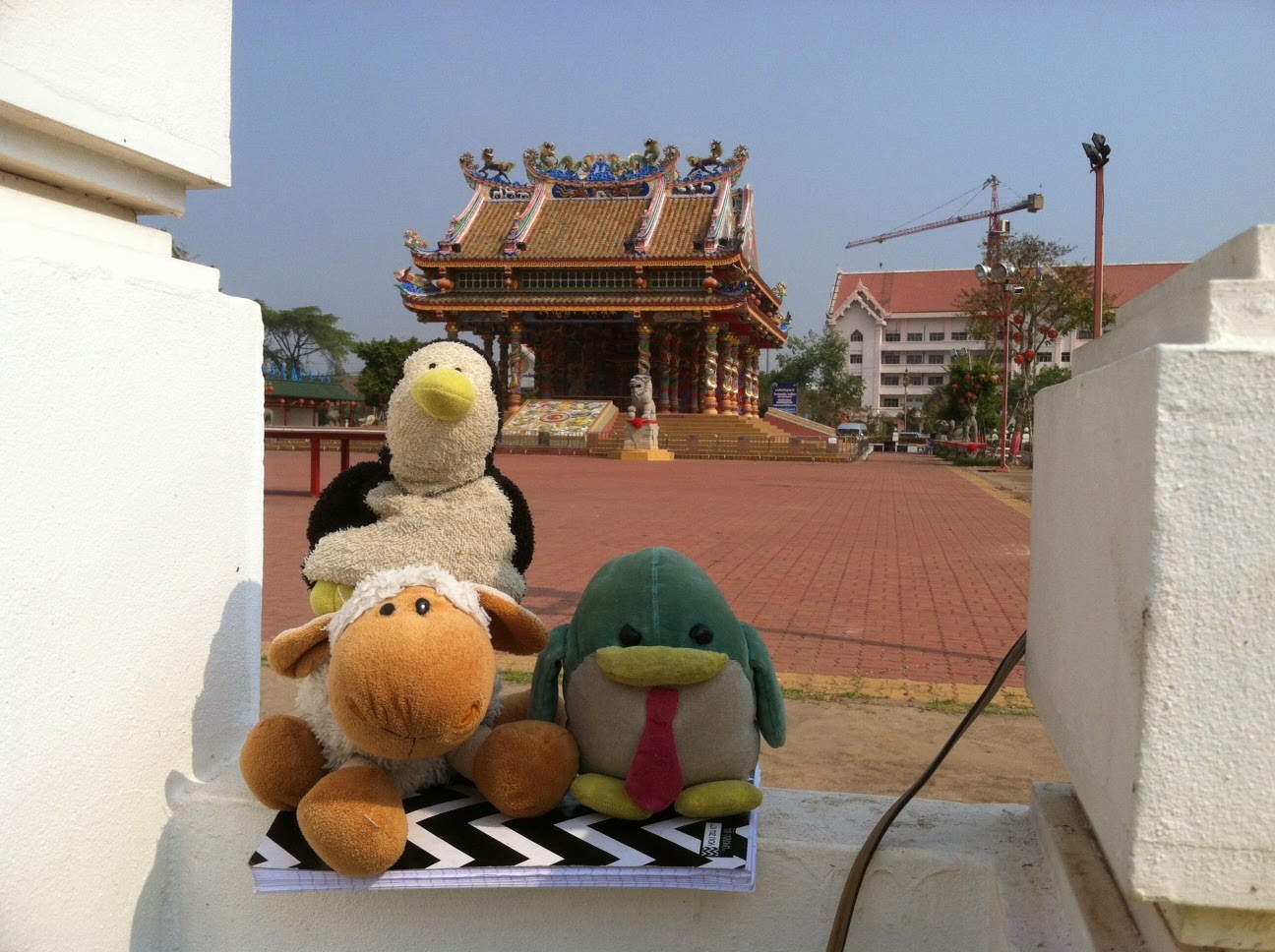 The drive back to Bueng Kan is long and rambling. We pass more small towns than I can count, miles of Thai countryside, and a few 24 hour karaoke bars that probably have a little more to offer than karaoke. We stop for directions at least eight times.

On Thursday we visit the local senior center. Dian is duly dragged up in front of the crowd to sing. Twenty rows of mostly women, dressed in red and pink clothes that flow down to their knees under the roof of the open-air building, clap in all the wrong places. Then they do a group dance, and we watch a very long presentation by three, younger pink-shirted ladies about… something in Thai.

Later the pink shirt ladies attempt to teach the seniors to dance. They do this with a small foam alphabet pad. The seniors are called up three at a time and then walk up and down on the pad, attempting to put their feet in the right places. It isn’t clear if the instructions are bad or the old folks just can’t follow them. This goes on for about an hour and we wander off to amble down the dirt road to the corner. A stray dog thinks maybe we have some food.

When we get back they are still foam padding. Dian’s mother wants us to watch some more. She wants Dian to figure out how the lessons work. Dian has no idea.

“They are literally just walking up and down, Mom,” she says.

The two of them have an argument that would send half the room under a table if they could understand. We leave.

Tomorrow we take a road trip to Bangkok. It’s a 10-12 hour drive. Our hotel is right next to the airport. The website depicts a comfortable, clean, modern hotel. It will, probably, have good plumbing. 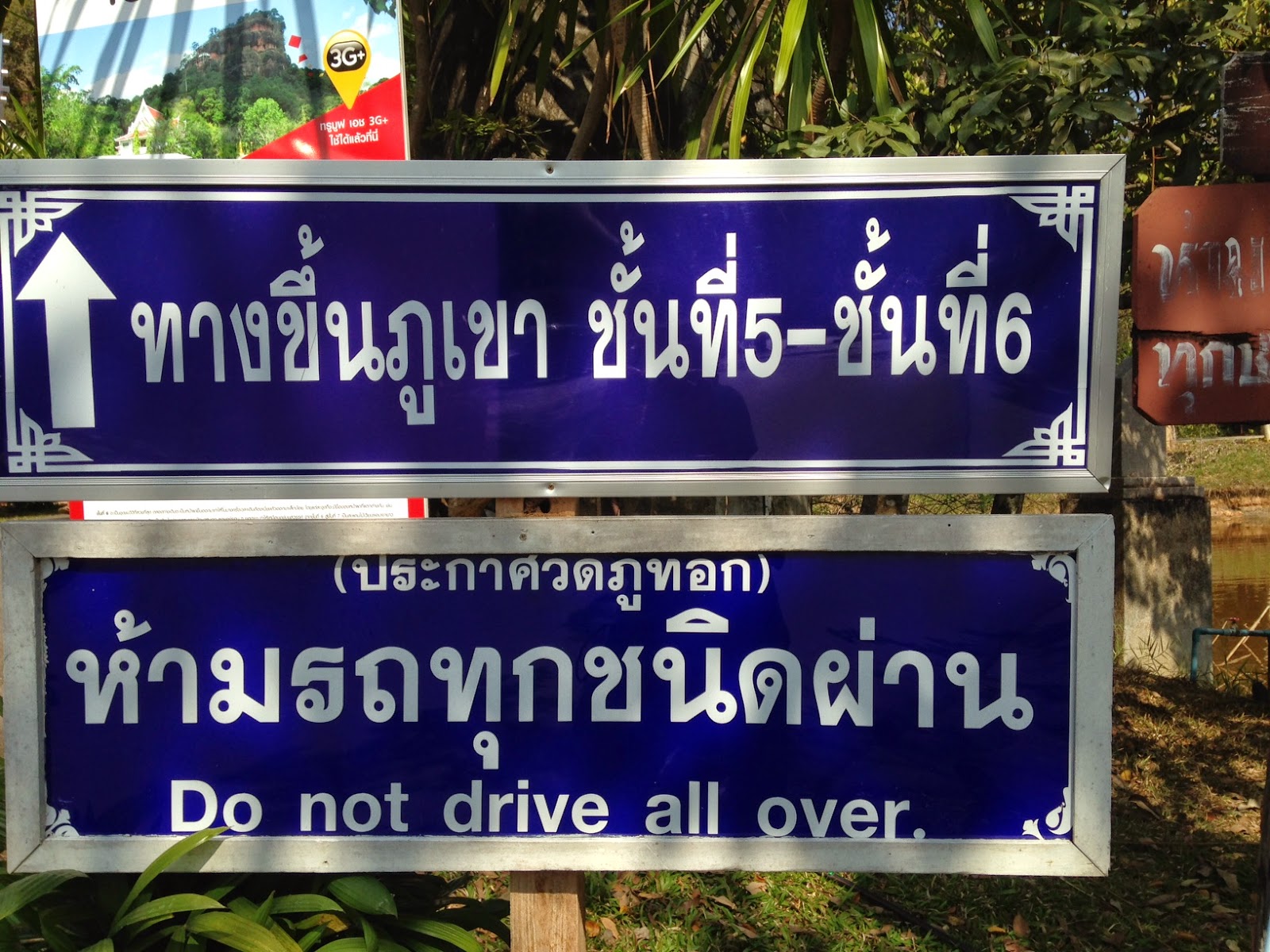