A Curmudgeon's Guide to Burning Man

Are you sick of new age hula hoopers rambling about theme camps and playa dust? Rolling your eyes at all those EPIC Burning Man posts?  Recently, my favorite grumpy lesbian asked me to explain the desert cult people.  According to her, “they get that sickeningly glitter pony glow in their eyes and revert to ambiguous fluffy descriptions like ‘it’s just the playa man, everyone is happy and lovely’--BARF!”


So for all you grumpity grumps out there, here is the straight poop on Burning Man.

The Man
A very large stickman.  Gets burned on Saturday.  This means something, or maybe it doesn’t.  Fun times. 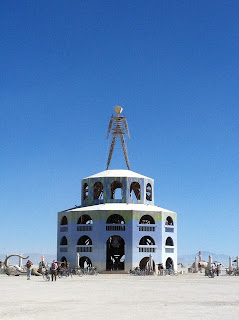 The Playa
The festival site.  A vast expanse of dust and sunshine in the Black Rock Desert of Nevada.  Hot during the day, cold at night, and prone to four hour dust storms.  Imagine you’re in the worst place you’ve ever been camping.  Now go and look for somewhere much, much worse.  You might end up here. 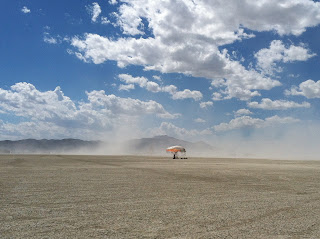 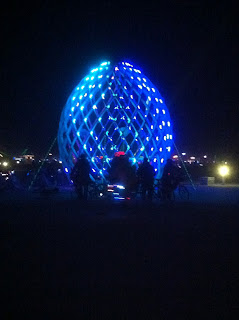 Burners
Attendees, or “participants.”  Burners come in all shapes and sizes, but lean heavily towards Wonder Bread.  If I had to guess, I would say the average person at Burning Man is a thirty something white male that didn’t party enough in college and spends the rest of his year chained to a keyboard.

Economy
Buying, selling, and all corporate advertising are strictly prohibited at Burning Man, with two exceptions.  The Center Camp Cafe has coffee, and ice is sold in a few places.  This might bring you closer to your neighbors, or it might make you really, really wish you had remembered the toilet paper.

Sex, Drugs, and Techno
If you don’t care about things like basic hygiene or sleep this will be the best part.  For the true curmudgeon, sexual relations at Burning Man will be the same as anywhere--everyone else will be having a lot of it.  And if you don’t like techno you better get some bad-ass earplugs, or spend all week at Death Guild Thunderdome. 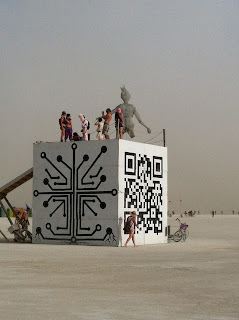 The Art
Going to Burning Man for the art is kind of like reading Playboy for the articles.  Playboy really does have good articles, but we all know you just wanted to see Kim Basinger naked.

Exodus
Burners love to give everything a cute name.  It makes life easier and can turn sitting in traffic into a spiritual experience.  Which is good--because come Sunday, that’s where your ass will be.  Sitting in traffic.  Oh, excuse me, Exodus. 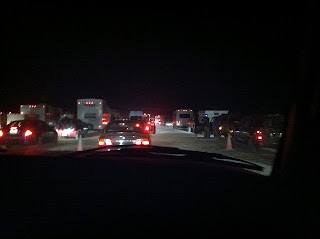 Common Terms
Every community has it’s lingo.  Here are a few things you might hear and what they mean.

Black Rock City = Yet another name for the festival site.

Radical Self Reliance =  Bring your own stuff.

The Gift Economy =  Give that stuff away to people who didn’t bring their own stuff.

Is this your first burn? =  Pretty sure I’m cooler than you.

Is your back sore? =  Would you like a massage?

Would you like a massage? =  I want to sleep with you.

Are your legs sore? =  I’m a creepy middle aged guy with no pants.

What not to do
I’m all for letting your curmudgeon flag fly, but it won’t win you many friends at "the burn." Avoid asking questions like:
Why is it ok to sell ice, but not water--what about water that used to be ice?
Why would I pay 300+ dollars and volunteer at an event thrown by a for profit corporation?
When was the last time you washed that?

You might be tempted to point out that bringing a crapload of drugs, water, and your car to the desert is fun, but has very little to do with “survival.”  Or that dubstep sounds like two robots taking a shit.  Or that dancing is defined as “moving rhythmically to music” and therefore very little dancing happens at Burning Man.  Don’t do this if you want to get laid. 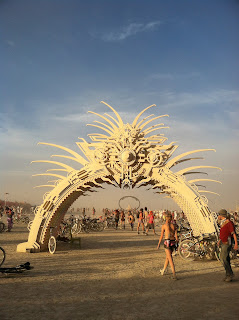 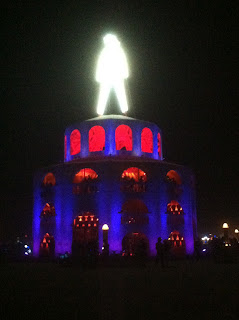 What’s the point?
Why endure massive dust storms, six hour traffic jams, and a third of the Bay Area’s douche bag population?  Why drag a week’s worth of water, food, and clothes to one of the world’s least hospitable campsites?  The truth is, there are as many reasons as participants.  But where else can you find a free coffee shop that will only serve you if you get spanked, ride a giant flaming scorpion or play in an abandoned shipwreck in the middle of the desert?  I go because Burning Man reminds me that all art--like life--is temporary.  So you better enjoy it while you can.

See you on the Playa,
--JDH